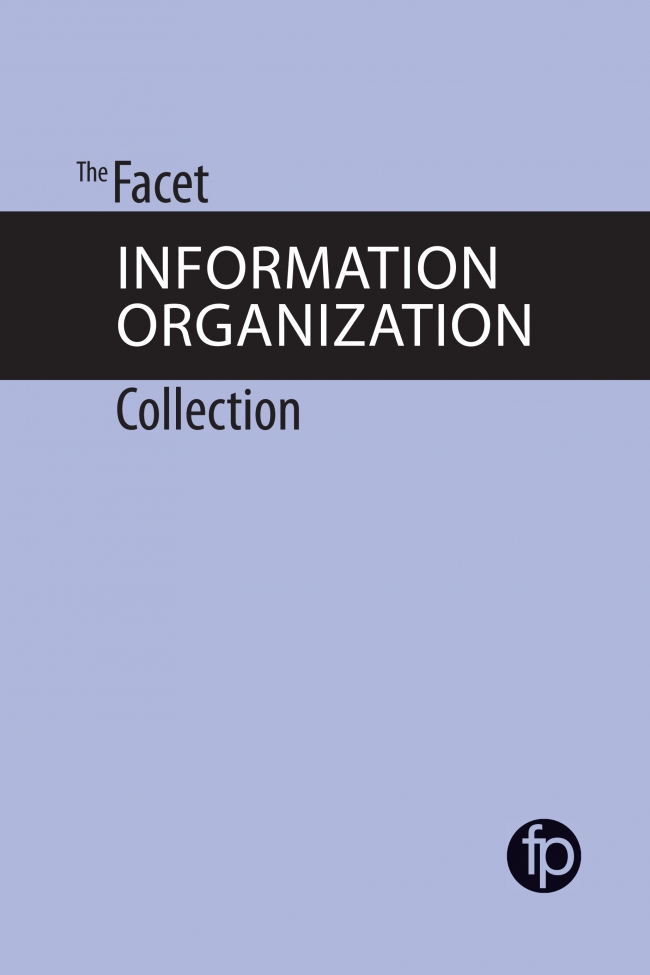 This Collection contains the following books:

There is a 10% discount off the combined price of the books in the Collection.

Table of Contents
About the Authors

Sally Chambers, Digital Humanities Research Coordinator, Ghent Centre for Digital Humanities.
Vanda Broughton MA DipLib is a Senior Lecturer in the Department of Information Studies at University College London (UCL), and Programme Director for the MA in Library and Information Studies Programme. She has taught, written and led training courses on classification for many years. She is Editor of the Bliss Bibliographic Classification 2nd edition and Associate Editor of the Universal Decimal Classification. She is the author of two other Facet titles, Essential Library of Congress Subject Headings and Essential Thesaurus Construction.
Seth van Hooland is associate professor at the Information and Communication Science department of the Universite libre de Bruxelles, where he holds the chair in Digital Information. Van Hooland is also active as a consultant for clients such as the European Commission and occasionally works for leading companies in the SemanticWeb industry such as Mondeca and Poolparty.
Ruben Verborgh is a PhDresearcher in semantic hypermedia at Multimedia Lab - Ghent University - iMinds, Belgium. As a Master in Computer Science Engineering, he closely follows and participates in the latest evolutions on the Web. He is particularly fascinated by the Semantic Web, Linked Data, Web APIs and autonomous Web agents, and has authored more than 40 papers on these topics.
Ed Jones has been cataloguing serials, on and off, since 1976, and over the years has authored several scholarly papers and made numerous presentations on serials cataloguing, the FRBR and FRAD conceptual models, and RDA. He has been a member of the CONSER Operations Committee, on and off, since 1981, and recently served as an RDA advisor. In 1995, he received his doctorate in library and information science from the University of Illinois at Urbana–Champaign. He is currently associate director for assessment and technical services at National University in San Diego.
Michele Seikel is Professor of Digital Resources and Discovery Services at Oklahoma State University.
Dr Louise Spiteri is Director of the School of Information Management, Dalhousie University, Halifax, Nova Scotia, Canada. Dr. Spiteri has published extensively in the areas of social tagging, folksonomies, social discovery systems, and library cataloguing. Dr. Spiteri teaches in the areas of information management, metadata, records management, cataloguing, classification, and taxonomies.
Robert L. Maxwell is senior librarian and chair of the Special Collections and Formats Catalog Department at the Harold B. Lee Library at Brigham Young University. His most recent book, FRBR: A Guide for the Perplexed, was published in 2008. He has chaired the RBMS Bibliographic Standards Committee of ACRL and has served on the Committee on Cataloging: Description and Access (CC:DA) of ALCTS. He is the author of the Highsmith Award-winning Maxwell's Guide to Authority Work as well as Maxwell's Guide to AACR2.
Marcia Lei Zeng is Professor of Library and Information Science at Kent State University in Kent, Ohio. She holds a PhD from the School of Information Sciences at the University of Pittsburgh and an MA from Wuhan University in China. Her scholarly publications consist of more than 80 papers and five books, as well as over 200 national and international conference presentations and invited lectures.
Jian Qin is Professor at the School of Information Studies, Syracuse University. Dr Qin holds a PhD degree from the University of Illinois at Urbana-Champaign and an MLIS from the University of Western Ontario. She has published more than 60 papers and has given presentations at numerous national and international conferences and workshops.
Anne Welsh is Lecturer in Library and Information Studies, School of Library, Archive and Information Studies, University College London.
Sue Batley is Course Director for the MA in Information Management, London Metropolitan University.
David Stuart is an independent information professional and an honorary research fellow at the University of Wolverhampton, and was previously a research fellow at King's College London and the University of Wolverhampton. He regularly publishes in peer-reviewed academic journals and professional journals on information science, metrics, and semantic web technologies, and in 2015 began writing a regular column for the journal Online Information Review called 'Taming Metrics'. He has previously published Web Metrics for Library and Information Professionals (Facet Publishing, 2014) and Facilitating Access to the Web of Data (Facet Publishing, 2011).
Thomas Brenndorfer began his career in cataloguing at the National Library of Canada in 1990. While working at the Guelph Public Library in 1997 he learned about FRBR, which had been presented at a conference on the future of AACR2 in nearby Toronto. He followed the development of FRBR to its full incorporation into a draft of RDA ten years later in 2007. Having seen the importance of FRBR for the future of catalogs he began giving presentations introducing FRBR and RDA concepts to cataloguers (and others eager to learn) at conferences hosted by the Ontario Library Association and Canadian Library Association.