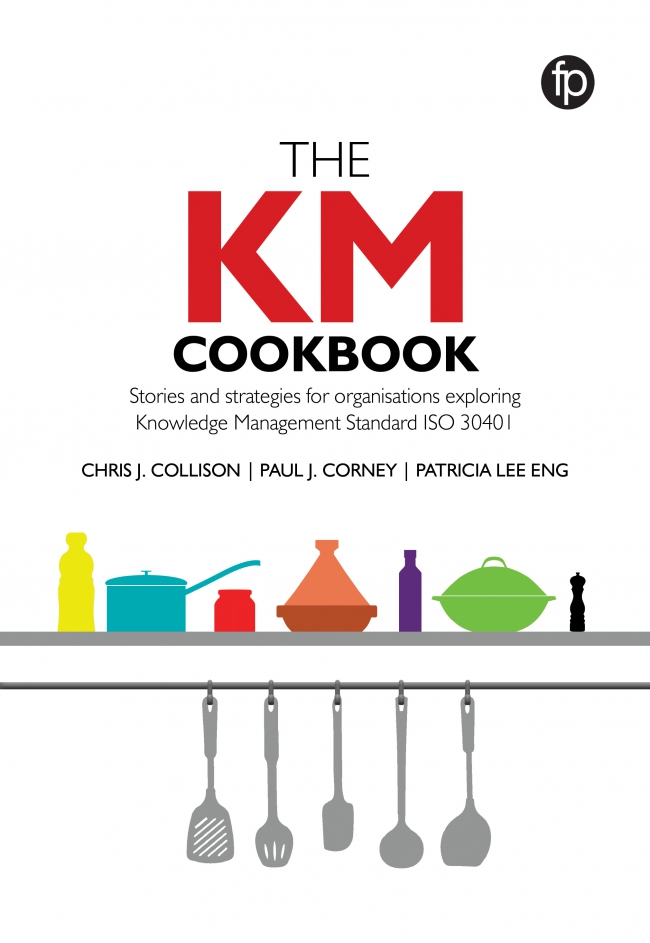 The KM Cookbook serves up a menu of success stories and strategies for organizations wanting to know more about Knowledge Management Standard ISO30401 – whether they intend to pursue certification, or simply seek to use it as a framework to review their existing programme and strategy.

The arrival of an internationally agreed standard and vocabulary, imbues fresh professional credibility to the field of Knowledge Management. Moving it on from a street food market of disparate approaches, it provides knowledge managers with a brand-new kitchen, and a moment during which they can pause and consider the service that they provide to their organisations.

The KM Cookbook uses the metaphor of the restaurant, its cuisine, owner, chef, staff, ingredients, menu-planners, customers – and a restaurant critic, to serve up ISO 30401 on a plate for the readers.

This book will be invaluable for CKOs, CIOs, CEOs and knowledge and information managers seeking to gain professional recognition for their function and to review their approach within a new framework.

Part I A new way to cook?

2 What kind of restaurant?

3 The role of the restaurateur

5 Getting some help: the staff

7 The restaurant critic: what to expect in an audit

Introduction: how to read the menus

12 Beyond KM: Collaborating, Learning and Adapting (CLA) in USAID

17 Transport for London (TfL), UK: learning to be world-class

24 MAPNA, Iran: the role of KM in designing and implementing world-scale projects

Chris Collison is a bestselling business author, consultant and internationally recognised expert in Knowledge Management. He has served over 140 client organisations around the world, ranging from the World Bank to the International Olympic Committee, UK Government and several business schools.
Paul Corney is a globally recognised KM figure, a member of the BSI KM Standards Committee that helped craft the ISO KM Standards and an acclaimed author. With a background in KM stretching back to 1994 as an advisor and business head, he has led assignments in more than 25 countries.
Patricia Lee Eng served as the US Nuclear Regulatory Commission's Senior Advisor for Knowledge Management where she created and managed NRC's KM programme saving over 57 million dollars in two years. A highly regarded expert inspector/ auditor for safety and quality, she is co-author of two KM books, a certified ISO 9001 QMS Auditor, and the first certified ISO Auditor for KM programmes.

Reviews
'Firstly, the KM Cookbook provides valuable practical guidance on how to respond to the new KM standard ISO 30401:2018 Knowledge management systems – Requirements which was published by the International Organization for Standardization (ISO) at the end of 2018...Secondly, the KM Cookbook provides guidance in regard to the "how" of KM in a way that recognises not just the diversity of organisational circumstances, but the distinctive characteristics of knowledge.'